« The Duke and Duchess of Cambridge have introduced their daughter to the world, as they left hospital to take her home to Kensington Palace. The princess, whose name has yet to be announced, slept in her mother’s arms during her first public appearance outside St Mary’s Hospital, in London. The princess – who is fourth in line to the throne – was delivered at 08:34 BST on Saturday after a short labour« . (BBC News, 2 May 2015). 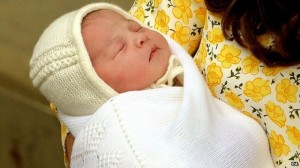